The Return of Silent Cinema 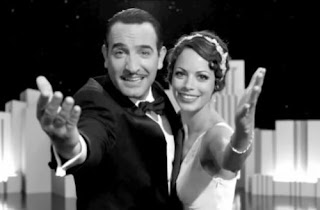 'Of all the cinematic surprises of 2011—the ascendency of Elizabeth Olsen, the excellence of Rise of the Planet of the Apes, Woody Allen’s return as hit-maker the renaissence of silent cinema was probably the hardest to see coming down the pike. When Harvey Weinstein enthused about a silent back-and-white film, starring two unknown French stars, which he’d just bought at Cannes, brother Bob suggested he check himself into a mental asylum. After it received a 15-minute standing ovation, Michel Hazanavicius’s homage to the days of swashbuckling matinee idols, iris shots, and Busby Berkeley dance numbers, The Artist, was marked up by Oscarologists as the outside favorite to win Best Picture.

Come November 23rd, cinemagoers will have a choice of two valentines to the silent era: The Artist or Hugo, Martin Scorsese’s 3D adaptation of Brian Selznick’s bestselling children’s book, whose poster echoes Harold Lloyd’s clock shenanigans in Safety Last (1923) and whose final 25 minutes fondly revisit the earliest days of cinema, from Melies's

Finally, in December, we have The Adventures of Tin Tin: Secret of the Unicorn, Steven Spielberg’s adaptation of the much-loved Belgian comic strip, a movie whose sight gags and breakneck pace hail back to Raiders of the Lost Ark, and from there to the hey-day of Mack Sennett and the Keystone cops. Nobody could accuse modern blockbusters of silence, but the aesthetics of silent cinema—its favoring of the visual over the literary, action beats over dialogue, international markets over domestic— is alive and well. Over at Pixar, filmmakers have been steadily mining Charlie Chaplin and Buster Keaton to give us the opening 20 minutes of WALL-E and the first ten minutes of Up—modern silent-movie classics. Meanwhile, James Cameron’s Avatar, whose earthling-alien romance, like that in E.T., proceeded via sign language (I-see-you), marked the evolution of an international movie grammar which vaulted borders and left critical sniping about Cameron’s creaky dialogue looking like the nit-picking of flat-earthers. And the guilty secret of Michael Bay’s Transformer movies? They play equally well with the sound down, if not better.

“The eye and mind are both bewildered by the too sudden and too frequent shifts of scene,” wrote William Eaton in American Magazine. “There is a terrible sense of rush and hurry and flying about, which is intensified by the twitching film and generally whang-bang music.” Eaton wrote this in 1914, but it could as easily pass muster as a critical harrumph from the summer of 2011. In fact, the further back you push, the more familiar it gets, as dialogue, plots, and characters all fall away to reveal an exo-skeleton of pure action beats. The very first movies were by definition action movies, made fast and sold by the brand (“every day a Biograph feature”) to an audience made up of largely immigrants and teens, all demanding something “happening every minute, allowing for no padding with word-painting, following climax after climax” as the Brooklyn Eagle put it in 1906. “The backbone of today’s business is the attendance of young people from seventeen to twenty-three years of age,” sniffed Harold Corey in Everybody’s Magazine in 1919. “At 23 other interests develop.”

For The Lonedale Operator, D. W. Griffith mounted his camera on the front of a speeding train in order to better capture the rush; for A Girl and Her Trust, he placed it onboard a car that was racing alongside a racing train, with another car in hot pursuit. His mastery of intercutting between parallel action reached its apogee in the chase sequence of The Birth of a Nation. When that film was released, in 1916, the film’s cinematographer, Karl Brown, noted “bigger and better, bigger and better became the constantly chanted watchwords of the year. Soon the two words became one. Bigger meant better, and a sort of giganticism overwhelmed the world, especially the world of motion pictures.” In many ways, this whizz-bang landscape of thrill rides, cheap scares and teen kicks feels closer to us than the Golden Age of the 1940s and 1950s, or even the 1960s and 1970s, when Hollywood, high on a mixture of the French new wave, auteurism, and pot, enjoyed an unparalleled creative growth spurt, one cut cruelly short by thekerr-ching of the cash registers for Jaws, and the boom of the laser cannons in Star Wars. As we all know by heart now, those two blockbusters flushed delicate arthouse sensitivities down the garbage chute and “pioneered the cinema of moments, of images, of sensory stimuli increasingly divorced from story” in Peter Biskind’s formulation.

This is fine as far as it goes, but if it’s the soul of cinema we’re fighting over, “the cinema of moments, of images, of sensory stimuli increasingly divorced from story” has a far greater claim on cinema’s central nervous system than the woozy psychedelia of Easy Rider. Looked at one way, Star Wars did not betray cinema at all, but plugged it back into the mains, returning the medium, after a brief spell of aesthetic etiolation, to its roots as a carnival sideshow, a magic act, one big special effect, punching through the fourth wall and rocking the audience back in their seats, as they were first rocked by the Lumière brothers cho-choo trains. “Star Wars is basically a silent film, was designed to be a silent film,” said George Lucas when I interviewed him for my book Blockbuster. “In terms of people’s aesthetics, especially critics: they complained bitterly when sound came in, that the medium had been destroyed, but the concept of cinema started as a vaudeville show. It started as a magic act. They took the magician off the bill, put up this sheet and they ran this magic thing, where you could see things you couldn’t see. They say summer is now dominated by films that are aimed towards kids. Well, kids are the audience. It’s a market-driven medium and it always has been.”'

—from my piece on silent cinema for Slate