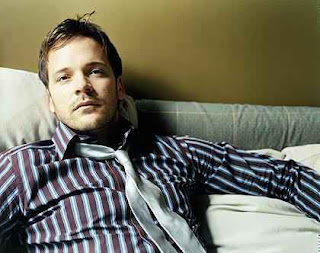 'The actor Peter Sarsgaard recently attended the 40th birthday party of a guy from his high school – an all-boys Jesuit school in Connecticut. “One of them said the wildest thing to me. He said, ‘we all knew you were like artistic, but you also looked like you were really out of it. Were you actually thinking about something interesting or thinking about something? Were you think about, like, us?’”

He laughs — more of a giggle, girlishly high. “I told him, ‘I was probably just spaced out.”

Sarsgaard gets this a lot. With his low-lidded, almond-shaped eyes, and sly, insolent manner, he often plays men honeycombed with secrets — a killer in Boy’s Don’t Cry, an editor in Shattered Glass, a sharpshooter in Jarhead, the seducer of Carey Mulligan in An Education — parts which instill in the audience a similar paranoia: what is that guy thinking? Is he thinking about us? If so, is it nice or nasty? “I do think a decent amount of what I do as an actor comes from my ability to not express,” he says. “I just smoulder. I combust internally.”

— from my interview with Peter Sarsgaard for Mr Porter