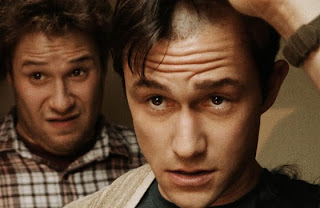 50/50 was okay. Seth Rogen is a gutteral pleasure, one of the truly relaxed screen presences on offer right now — just watching his face contort, doughily, with lustful thoughts is enough — but I wasn't sold on Joseph Gordon Leavitt's performance, or the character he'd been given to play. I get the idea: most of the comedy comes from the fact that Leavitt underreacts to everyone else's overreaction to his cancer diagnosis. Thus: the therapist trying to coax his feelings of anger from him is an over-earnest newbie. His mother is a histrionic narcissist. His girlfriend is fixated on conveying an impression of caring — so much so she forgets to show up for him, etc. Leavitt floats through it all, a limpid noodle, coolly amused by other people's tics and preoccupations. To a degree, this is how it seems to anyone who has ever been handed a severe medical diagnosis: they spend as much time managing other people's reactions as their own. But the screenplay omits to give him a reaction, and while this works for 3 or 4 scenes, by the time you get to scene 7 or 8, you're sidetracked by curiosity: when is this guy going to stop fixating on other people's emotions, however indecorous and inappropriate, and freak out about the fact that he has a 50/50 chance of survival? The other characters cease to look like over-emoting cranks and more like reasonable people given short shrift by a callow script. There's something a little shut-down at the centre of this film that has little to do with cancer and much to do, one would suspect, with the kinks of screenwriter's Will Reiser's temperament: the fact that his character ends up dating his shrink is interesting, to say the least, although it's presented in straightforward rom-com shorthand (she's sucks at her job, etc). But the film is amiable enough, Leavitt gets a moving moment of panic prior to going under anesthesia — a bit of observation that truly sings — and Rogen breathes life into every scene he's in. B-/C+