Getting through the Oxford Interview 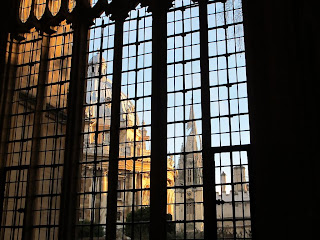 "Why do lions have manes? Would it matter if tigers became extinct? Why are both ladybirds and strawberries red? If the punishment for parking on double yellow lines were death, and therefore nobody did it, would that be a just and effective law? In a world where English is a global language, why learn French?" — sample interview question used by Oxford dons

I wish I'd been asked more questions like that. (Mostly they just asked me questions about an essay I had written about painting, although I do remember one of them asking at one point whether Nietzsche's theory of eternal return could be applied to the color circle, a question I still don't really understand). Why do lions have manes? Maybe their whole bodies would like to have fur that thick but it gets in the way of running. Would it matter if tigers became extinct? It would matter to the tigers but strictly speaking it's none of any other species' business. Why are both ladybirds and strawberries red? Ladybirds so they don't get eaten, strawberries so they do. Death for parking would be neither effective nor just since it would encourage lawlessness in areas less stringently punished. Why speak French when English is a global language? To communicate with those who speak French but not English.