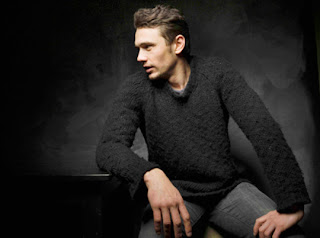 'There’s a weird vibe in the room, as if a team of pranksters had departed just seconds before us stepping into it. At first I put it down to Franco’s tiredness. He answers my questions at length but a little abstractly, all the while maintaining almost hypnotic amounts of eye contact, tilting his head back at this weird Cabinet-of-Dr-Caligari angle until he is staring at me down the chiseled planes of his face. I half expect a maniacal laugh to escape his lips as it did when he played the Green Goblin in Spiderman 3.

“….the video diaries were set up in a way that in diegetic terms he’s addressing his family,” he is saying, “so its almost like a first person experience, but without breaking the 4th wall….”

“I’m sitting here, talking, and all I’m thinking about is, ‘I just gave the guy a wet handshake’.”

“I just wanted to get it out in the open rather than have to think about it all the time.”

Franco cracks a big grin that seems to stretch from ear to ear. The ice has been broken. He’s always a little weird upon first meeting strangers, I later find out. “When we first met him, we thought he was stoned,” says director Danny Boyle, who cast Franco in his new movie, 127 Hours on the strength of his performance as a stoner in Pineapple Express. “I remember speaking to this casting director at Fox in and she said, ‘don’t be put off by that. He does that to keep you at a distance at the beginning, so that he can suss you out’. You think he’s sleeping, but in fact he’s hyperactive. He never rests.”' Franco would seem to have just two gears, catatonic or hyperactive, or more accurately he seems to have forged some hitherto unknown third gear, combining the ease of one with the intensity of the other. “He kind of surfs into scenes, on a wave of relaxation,” says Boyle.

—From my interview with James Franco in The Daily Telegraph