What my grandfather was doing 65 years ago 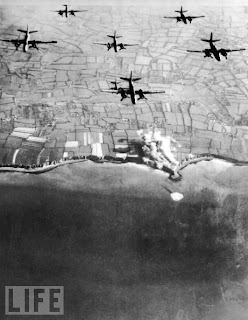 "The week following the Rhine crossing got a bit hectic because the army was advancing fairly rapidly into Germany and we flew every day sometimes to attack German front line positions to soften them up for the army and other times on sweeps deep into Germany to attack the trains and road vehicles that were bringing supplies to the German troops. We much preferred the attacks on front line positions, there wasn't any flak there because it was always pulled back when the army got too near. I had had a couple or so small holes in my aircraft when I was hit by small shell fragments or by the odd bullet but nothing of any consequence. That all changed on 31 March 1945 when I was one of eight aircraft that were sent from where we were in Southern Holand on a sweep to the North to attack the German transport that was retreating from Holland into Germany.

The weather was pretty foul, the visibility was not much more than a mile and the cloud was 8/8 at 2,000 feet. We had to fly lower than that which meant we were sitting ducks for German flak. Because of the bad visibility the formation leader led us over a German airfield which he hadn't seen and they always had a lot of guns. There was flak everywhere and I was very quickly hit on the starboard wing. I climbed into the cloud to get away from it and when I was clear of the airfield I descended until I was below cloud. There was no sign of the rest of the formation and our orders were that if one was alone one went home very quickly because it wasn't very safe to be a single aircraft over German territory. I turned and headed for home flying very low so as to make it difficult for anyone to hit me, until I saw some of our army vehicles. Thinking I was now safely away from the Germans I climbed to about 1500 feet and started looking at my map to find out where I was. It wasn't as safe as I thought because there was suddenly flak all around me and I was hit in the port wing and behind the cockpit. I felt a thump behind my right shoulder as if somebody had punched me and a number of holes appeared in the perspex cockpit canopy. At the same time I saw what looked like smoke streaming back from the port wing.... My shoulder began to feel a bit funny and I could feel something trickling down my back so I realised I had been wounded. It took about 15 minutes to get back to Helmond and by the time that I got there I couldn't move my right arm and had to do everything with my left hand. It was a bit difficult to reach the undercarriage control lever and the flap lever because they were low down on the right hand side of the cockpit but it was a case of reach them or do a crash landing and I didn't fancy doing that. I figured that I had had enough risk for one day."

From my grandfather's account of his time flying Typhoons for RAF Squadron 137. Derek was 17 when the war broke out, 18 when he enlisted and 22 when he was wounded. He carried the shrapnel around in his body for the rest of his life. When I was 7 or thereabouts, a piece of it worked its way out of his knee. I remember being very impressed by that piece of metal's journey, also by how unfazed he seemed to be about the whole thing. Was there any more? Didn't he want to get it all out? What happened if he walked past a very strong magnet? When was the next bit coming? Which bit of him would it choose to come out of? I definitely knew I had something special on my hands after that. Nobody else that I knew had a grandfather with odd bits of aircraft fusillage floating around their bodies. Just mine.