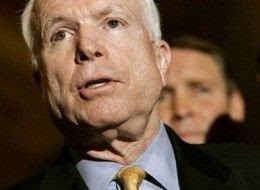 McCain seems genuinely oblivious to the propaganda victory he would be handing Ahmadinejad. But he can't be: he utilised that very same trick himself during the 08 election when he seized on foreign support for Obama as a sign that he was not to be trusted. Maybe that's why he isn't willing to acknowledge the tactic's existence. The possibility that America may be demonised is anathema to anyone who spends so much time demonising other countries. Its like swahili, bat sonar, birdsong — it just  doesn't register.

At the press conference today, reporters seized on the fact that Obama appeared to have taken a tougher tone on Iran. "What took you so long?" asked one. Another asked if McCain's criticisms had prompted the new tone. I would have thought the answer for the difference in tone is obvious: between Friday and today upwards of 19 people have died.