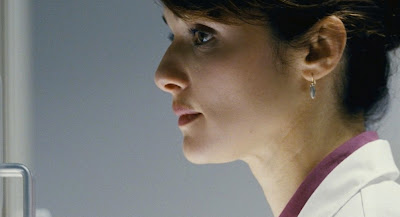 Things we liked about The Bourne Legacy:—


1. The first hour, but in particular the temporal overlap with the events of The Bourne Ultimatum. A wonderful idea, as nifty in its way as the return to the events of Back to the Future in BTTFII.

2. Renner. I've had my doubts about his transition to franchise hero — his quiddity is curiously hard to bottle — but this came closest to keeping his unpredictable pugnacity intact.

3. Weisz in horn-rims — accent good, mannerisms a little British in places, but by far her best outing in an action pic.  More beautiful now she's older.

4. The pleasant, and unfamiliar, smartness of Gilroy's script: Aaron Cross felt two moves ahead of those trying to track him, so all the "who could be doing this?" lines really found their target.

6. The casting in the mid-ranks: a lot of great faces, unusual accents. Gilroy knows how to fill out the mid-rankers in corporations / bureaucracies.

7. The spree shooter. A horrifying surprise.


1. Ed Norton, still too preppy to play a bad guy, even more so with that transfixingly awful haircut-and-highlights. What's the matter with using David Strathairn?

2. The bad guy at the end, looking suspiciously like less like a sleeper agent and more like Our Model in Bangkok. All that build-up and he can't even catch up and lay one fist on Renner. Plus he chooses a car to chase a bike.

3. The shaky-cam chase. Almost home and dry and then a relapse.

4. Renner babbling about getting his fix the moment he has saved Weisz. A jolt of unexpected selfishness for her and the audience.