The world in which we live in 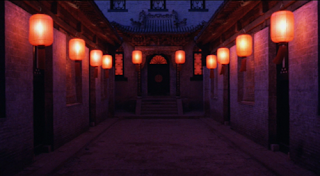 "In a N.Y. Times interview with former Village Voice film critic Jim Hoberman, co-authors A.O. Scott and Manohla Dargis include a quote that struck a chord with me. Hoberman mentions Francois Truffaut's Shoot The Piano Player as "the first movie I really wanted to live." He meant that Truffaut's film was the first "sacred text...a kind of synthesis" that he really want to live in... I used to dream about submerging myself in the 1959 world of North By Northwest, providing I was well dressed and had lots of cash in my pockets. In the early '80s I wanted to live inside Michael Mann's Thief, and inside Heat and The Insider in the '90s. I do know that one realm I would never, ever want to live in would be the world of Jason Statham movies. That would be hell." – Hollywood Elsewhere

For me it breaks down more specifically: the russian hotel in Fincher's Benjamin Button and the writing cabin in Dragon Tattoo, Deckard's apartment in Blade Runner, the lantern-filled atrium in Raise the Red Lantern, the French's Veronique's bedroom-in-a-rain-storm in The Double Life of Veronique, the prairie house in Days of Heaven, the Parisian shopping bits of The Conformist, yes of course to the overnight train in North by Northwest, Jimmy Stewart's apartment in Rear Window, and the top floor of Katherine Hepburn's mansion in Holiday.