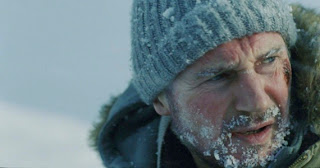 Is Liam Neeson's the last voice you'd want to hear before you die? An early scene in Joe Carnahan's tough, magnificent film The Grey, answers that question, although the title is ambiguous. After much consultation with my date, I have decided it refers to either a) the soft striation of hair at Liam Neeson's temples; 2) the delicate period of mid-life at which, rather than date models or a buy a porsche, Neeson has decided to reinvent himself as an action hero; or c) the pack of ravening wolves picking off his band of air-crash survivors as they claw their way through the snowy arctic tundra. Let's try c). Next to the manufactured conflicts and airy kill-ratios of your average Hollywood thriller, The Grey is a keening, white-knuckled scrap of a film — these guys have a real fight on their hands, the wind at their backs, the wolves at their heels, and death settling on their spirits like chloroform. Joe Carnahan's film is all the things action films like to think of themselves as being — tough, edgy, flinty, gritty, etc — but mostly aren't, and adds a wind-chapped sense of Fatalism you almost don't recognise so long has it been since you felt it at the cinema: when was the last time you looked at a man on screen and thought 'that man is going to die,' and felt it, not as a brief fillip of excitement, but a marrow-deep certainty. The film's surgeon-like calm is riveting. "In about five seconds I am going to start beating the shit out of you," says Liam Neeson at one point and both the directness of the writing and Neeson's low, urgent delivery cut through the bombast of the multiplex like wire through wedding cake: the large Saturday night audience I watched it with last night sat there in something close to awe, silenced. This film was serious. It seemed to contain important information about life and death and God and the fine art of attaching shotgun shells to the end of long pointy sticks to defend yourself against a line of advancing wolves. Good to know. I could have done without the flashbacks to Neeson's father — we already have a dead wife — but otherwise: a minor classic, the first exceptional film of 2012. B+