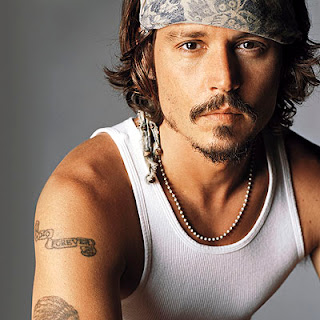 Which is more eccentric, Johnny Depp’s performances or the influences he claims lie behind each one? It’s a close run thing. For his role as Jack Sparrow in the Pirates of the Caribbean franchise Depp famously drew on Rolling Stone Keith Richards, but also Parisian cartoon skunk Pepé Le Pew. “I’m absolutely convinced that he’s a great ladies man,” he said of the latter. For his turn as the abysmally self-convinced director Ed Wood, Depp channelled some of Ronald Reagan’s eternal optimism (ouch). For Willy Wonka, he combined Michael Jackson and Anna Wintour (double ouch). And for Edward Scissorhands, he drew on both Buster Keaton and a favourite childhood pet dog. “Even when he’d done something wrong and you’d reprimanded him, he would cower away” Depp recalled, “but the second you called him back he would be there, bright and full of love.”

What do you notice about that lot? First, that there are not many figures in there that Depp really likes. Second, that when he does base a character on someone he admires – as in Pirates and Scissorhands – he comes up with his best performances. As an actor Depp is not always best served by his own instincts, which are essentially those of a parodist: sly, side-winding, self-subverting. There was a time — in between thumping photographers, trashing hotel rooms and turning down roles in Titanic, Speed and Interview With the Vampire — when you wondered if he really wanted to be a movie star. He hated being photographed, didn’t watch his own movies, spent most of his early career in flight from the heart-throb status thrust on him by the Eighties teen soap 21 Jump Street, and took a spray can to his image by choosing roles such as a teen rebel in John Waters’s Cry-Baby and the lead in Edward Scissorhands, Tim Burton’s majestic film about a boy who cannot touch those he loves. Beneath the fright wigs and angora sweaters of his seven Burton collaborations, from Edward Scissorhands to Alice in Wonderland, it’s easy to overlook the extent to which the director indulges Depp’s desire to curl up and disappear.

His range is narrow but deep. As easy as it is to mock some of his more outré pet projects — he tinkered for years with his directorial debut The Brave, an unreleasable farrago about Indians and snuff movies starring the late Marlon Brando — there’s no denying that on a good day off-kilter intensity is precisely what gives those Cherokee cheekbones of his their resonant frequency. He was ineffably gentle playing Leonardo DiCaprio’s older brother in What’s Eating Gilbert Grape, the first film to uncover a deep protective streak in the actor. When directors manage to ignite his sense of chivalry, they are in luck.

His work in Ed Wood, by contrast, fastened onto the B-movie director’s delusion and never let go. It’s not his fault that Burton’s conception of Wood didn’t seem to extend much beyond finding his awful movies funny. Burton’s own tend to resemble a collection of colourful cameos in search of a lead, with Depp at his happiest on the sidelines, letting off firecrackers. It is a crowning irony of Depp’s career that when one of his kooks finally did hit home with an audience — the props, the beard, the teeth, the accent, the mannerisms all finally coming together into one magnificent package — it was not in a Burton film, but in a Disney theme-park-ride turned summer-franchise, Pirates of the Caribbean, no less.

It’s hard to overstate the importance of that film’s success, not just financially but creatively. It proved two things: firstly that Depp, like most artists, is best when swimming upstream rather than when surrounded by like-minded collaborators. He had to fight for Sparrow. Disney executives took one look at the character and said: “He’s gay, he’s drunk. What are you guys doing?!” The actor replied: “Trust me or fire me.” And secondly it proved Depp could still connect with the popular audience that had been all but ready to give up on him.

Since Pirates, Depp has almost been a different actor, as if something in that movie freed up something in him, allowing him to finally relax into the role of movie star. He allowed himself to be adored by Marion Cotillard in Michael Mann’s Public Enemies — a neat echo of the love affair between Depp (now 46 years old) and the entire female population of France, where he lives with his long-term partner, actress Vanessa Paradis. It’s hard to imagine the Depp of old snapping off Dillinger’s smooth chat-up lines with such old-school movie-star panache as he does in Mann’s film. He is currently in Venice with Angelina Jolie, filming the new thriller from the director of The Lives of Others. There was a time when Jolie would have eaten Depp for lunch. Now, I’m not so sure.

— from my piece for The Daily Telegraph about Depp's career