The best film sequels of all time I.M.H.O.* 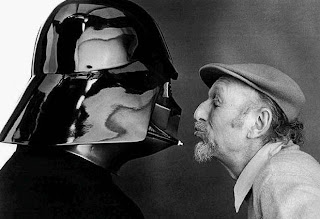 From a longlist that includes: Back to the Future III, The Color of Money, Bride of Frankenstein, Lord of the Rings: The Two Towers, Indiana Jones and the Last Crusade, Goldfinger, Casino Royale, Magnum Force, The Bourne Ultimatum, Superman II, Star Trek II: The Wrath of Khan, The Spy Who Loved Me, The Dark Knight, For A Few Dollars More, The French Connection II

I was going to post the pic just for the hell of it (from Raras Fotos de Star Wars, worth checking out for the pic of Chewbacca copping a feel of Princess Leia), but since we're here, how about a list of the best sequels of all time? Every other blog seems to have one. The Empire Strikes Back, for sure, although I am not one to look lightly on that shoddy ending — I can remember being furious as a kid. Still: the snow battle at the beginning is one of the best openings to any sequel, with all our characters gradually coming together in an unfamiliar context. More sequels should begin in media res like this. The Godfather Part II, definitely, although not for the de Niro backstory, rather the Cuba stuff: the suits, the cars, the chalky light, Lee Strasberg. Toy Story 2 for its object lesson in the art of story development: all the familiar elements flowing organically into new contexts that seem inevitable after the fact. (The toy mortality theme really worked for me.) From Russia With Love for the simple reason that it established Bond in a genuinely foreign and memorable milieu (that wasn't a carribean island). I can still see the steam from that train in the penultimate scene. Regular readers of this blog will know what a fan I am of the bazooka ambush in Clear and Present Danger: I caught it again on TV the other day and loved the thrill of Ryan being invited into the Oval office and the queasiness when he speaks out of turn. Both Linklater's Before Sunset and Trufaut's Stolen Kisses allow real time into the equation, catching up with their heroes and heroines after several years have passed. It's astonishing how powerful this is, what a hole it punches through the illusion of eternal youth promised by the movies. Aliens played a similar trick, this time allowing whole decades to pass: Ripley loses a daughter. I've been writing too much about James Cameron recently but what can I say: both T2 and Aliens get the two contrary directions required of the form — building up, and winnowing down — exactly right. Sequels like soups basically: you throw even more into the pot, then reduce it to a concentrated jus.