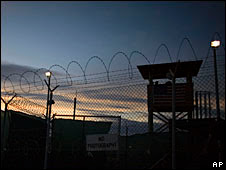 "We have laid it all out for our enemies. Publicizing the techniques does grave damage to our national security by ensuring they can never be used again" — Anonymous Bush administration official, protesting Obama's release of the torture memos.

Isn't that the point? I would have thought that Obama's ban on torture (effective Jan 21) was the thing that tipped off our enemies that we weren't going to be torturing them. He wasn't too secretive about it as I remember. I saw it on TV.*

“I don't believe Obama would intentionally endanger the nation, so it must be that he thinks either 1. the previous administration, including the CIA professionals who have defended this program, is lying about its importance and effectiveness, or 2. he believes we are no longer really at war and no longer face the kind of grave threat to our national security this program has protected against.”

The former. To date, the Bush administration have not been able to name a single piece of actionable intelligence that came from torturing suspects, although in the WSJ today Mukasey and Hadley trot out the usual claims about Abu Zubaydah:

Zubaydah is the suspect they waterboarded 83 times, and whose coerced testimony triggered a series of alerts and sent hundreds of CIA and FBI investigators scurrying in pursuit of phantom plots — against shopping malls, banks, supermarkets, water systems, nuclear plants, apartment buildings, the Brooklyn Bridge, the Statue of Liberty — none of which turned out to have any basis in reality. “What we got was pabulum,” said FBI agent Jack Cloonan. "We spent millions of dollars chasing false alarms," said one intelligence official.

Instead, watching his torment caused great distress to his captors, the official said. Even for those who believed that brutal treatment could produce results, the official said, “seeing these depths of human misery and degradation has a traumatic effect.”

That's as good as it gets — the administration's one success story. Asked by a journalist whether he knew of any attacks on America that had been disrupted by information gained from torture, FBI director Robert Mueller at first declined to answer. “I’m really reluctant to answer that,” he said, then paused, looked at an aide, and added: “I don’t believe that has been the case.”
*Former CIA director Michael Hayden was allowed to get away with this on Fox news today. “It describes the box within which Americans will not go beyond. To me, that’s very useful for our enemies."
I understand that Fox is the channel of barbarians, but even so. The argument is so fallacious, it barely even registers as an argument: it just clears its throat and implodes. If the interrogation methods are no longer being used, why would the legal justifications used to justify those methods be of any intelligence value to our enemies? Not just that but "very very useful"? And yet, incredibly, this appears to be the main pro-torture talking point coming in response to Obama's release of those memos. Even more incredibly, it is getting repeated on news channels — and not just Fox but MSNBC and CNN — where it is listened to by news anchors who nod, as if they were hearing sentences in English that reasonable people might be expected to consider. Sometimes I wonder if the news media's dedication to the notion of fair-mindedness would one day lead them to say, "yes but, in all fairness, some would point out that 2 plus 2 equals five." How nonsensical does an argument have to get for them to intercede and help out? Hayden is dribbling soup down his shirt — he's whispering to the faeries at the bottom of the garden — and they're sitting there nodding, sagely.