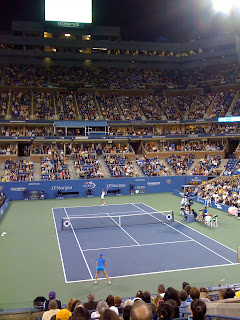 To Arthur Ashe Stadium and the women's final of the US Open! We had excellent seats, too, maybe not so close as to make out the Samantha-Mortonish dimples in Kim Clijsters's beautifully cleft chin, but close enough to get the full effect of that butt-shimmy she does while waiting for a serve — it reminds me of the move my cat used to do while readying herself to pounce on a leaf. A pretty good description of the match, truth be told, with the role of the leaf going to a nervily self-routing Zvonareva. Clijsters didn't so much win as take the match being offered her, gingerly at first, as if suspicious of Zvonareva's gift, but with increasing confidence as the points started collecting. It was worth it, though, for Clijster's Pat-Cash-like clamber over the stands to embrace her best beloved; the on court appearance by the curly, blonde Johnson's cherub that is her daughter; and the full post-match emote-a-thon that was her thank-you speech: boyfriends, friends, coaches, ex-coaches, mothers, fathers, the fans, 9/11 victims, ball boys, ball girls... It was reminiscent of many an Oscar speech, and by the end 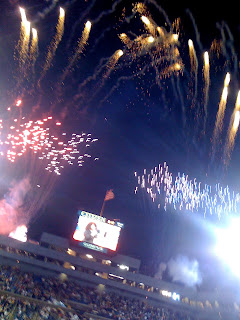 spectators had begun to leave, but everything about Clijsters is so mumsily down-to-earth that the effect was strangely unstarry, like a tipsy non-drinker who can't let go of the karoake mike. The other thing I noticed is a) how much I missed John McEnroe's TV commentary and b) how tempting it is to shout something out. When I'm watching on TV, I usually sit in high judgment of the ill-disciplined yahoos who can't control their tourettish outbursts, comparing it with the bone china decorum of Wimbledon (even though British crowds are just as awful in their own way, cheering double-faults and then giggling at their own partisanship, but that's another story). When you're actually there, and Clijsters is swinging just yards away — you could almost reach out and touch her, the fabric of history just waiting for you to insert yourself into it, like Zelig — the once-in-a-lifetime opportunity to make a nincompoop of yourself comes at you hard and fast.