QUOTE OF THE DAY: Tony Blair 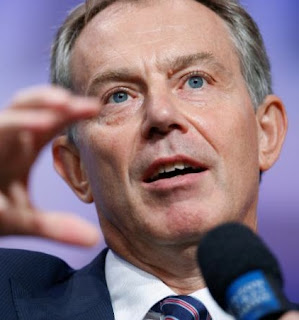 "I can't regret the decision to go to war. I can say that never did I guess the nightmare that unfolded, and that too is part of the responsibility. The truth is we did not anticipate the role of al-Qaida* or Iran. Whether we should have is another matter; and if we had anticipated, what we would have done about it is another matter again." — Tony Blair, A Journey

That's the problem with wars, I guess. So gosh darned unpredictable! They never go the way you expect. Not like birthdays in that regard. Or TV shows. Or tea time. No. Always haring off in some infernal direction that nobody would ever guess in a million years! All you can really do is get them off to a good start, really. A nice kick-off to festivities and crossed fingers and that's it really. Just like kids. You can pack their lunch, ruffle their hair and wave them off at the station, but after that — forget it! Who knows what they get up to! Little bleeders. Bless.

* Note how casually he unravels the lie of American involvement. Al Qaeda were so not on the British radar as a reason for going into Iraq that Blair comfortably classes it as one of the things he might reasonably not be asked to even anticipate. America's foremost casus belli was, for the Brits, not even the remotest of wild cards. One senses two propaganda machines in hopeless disunity.