An Oscar for Natalie Portman! (I think) 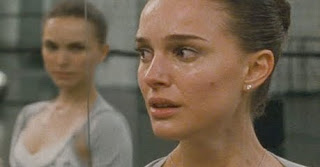 Natalie Portman has apparently just hoisted herself to the front of the Oscar race with her peformances in Black Swan. The critics have spoken. In Contention's Guy Lodge:

The role cleverly forces the actress into her most pinched, peaky mannerisms — even her little-girl voice is pitched an octave higher than usual — only to undercut them as the character gradually loses her self-awareness.

Natalie Portman... gives one of “those” performances, transforming herself after ten months of training into an accomplished ballerina, almost uncomfortable to watch as she consumes her difficult role.

Nina may be the most tightly wound character I’ve seen in a movie since Peter O’Toole’s homicidal Nazi in “The Night of the Generals” 43 years ago. Often sweaty, given to unnaturally tense little intakes of breath (the soundtrack emphasizes this), plagued by rashes on her shoulderblades (where swans’ wings would sprout) and prone to poking, cutting and splitting her skin and nails, she is often told she should relax, that she’s way too uptight.

To summarise, then. Forced into pinched, peaky mannerisms. Voice an octave higher than usual. Tightly wound and often sweaty. Uncomfortable to watch and plagued by rashes. Beset by myriad insecurities, peeling skin and obsessive toenail cutting. But how too, too delightful! A true Oscar winner for the ages! How often, while catching Casablanca in reruns, have I found myself thinking that Bergman's Ilsa needed a few more scenes hunkered over the bath-tub, tearing up her cuticles. And which Faye Dunaway performance wouldn't benefit from an unexplained rash or two? I have no doubt that these slips in personal hygiene will work wonders for Portman's Oscar come Oscar time — she sounds like she's channeling Mia Farrow at her most neurasthenically excrutiating — but do they add up to a performance one might stand a reasonable chance of enjoying? Or is that too dumb a question?