Will I support England or the USA? Hmm 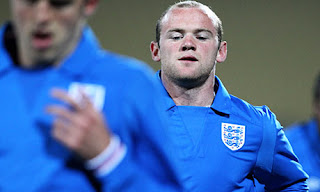 "Being Anglo-American is not like being, say, Anglo-German or Russian-American. It's not overtly divisive. Wars between my two nations come along very rarely; there is a probably unhealthy degree of agreement over foreign policy; and sporting events (a proxy for war) are rarely significant enough to cause major trauma. Each country dwells in a sphere of sporting influence (baseball and gridiron; football and cricket) that never really overlaps with the other...I'd like to think I can support both teams, enjoying the spectacle without regressing to the binary thinking that evolutionary biologists have identified as one of the triggers of genocide. I'll be serene and Corinthian about it, like the Queen watching the Commonwealth games. Except I know I won't be. In my heart, I'm 90% certain that I'll end up supporting the losing side, whoever that is. It's going to be hard to love a triumphant Eng-er-lund, and equally hard to feel that the world's last remaining superpower needs success in yet another field.' — Marcel Theroux, The Gaurdian

My friend Marcel in the Gaurdian the other day. I don't feel quite as torn. It would be interesting and chastening to see the US beat England — a fulfillment of morbid expectations — but there's no question in my mind that I don't want it to happen. I've become more patriotic since moving here, at least when it comes to sporting events, and have grown surprisingly fond of Europe: the differences between the French and the Germans and Greeks and the Turks, from this distance, seems like mere Lilliputian squabbling. America has shrunk my distances, highlighted submarine affinities with fellow Euros: I am just as delighted to meet an Italian or a Frenchman in New York as I am a Brit, if not more so; and when it comes to the World Cup, I find it easy to switch sides once England have taken their bow from the tournament, in traditional fashion — on penalties after half an hour of extra time against a technically superior Latin side they have somehow managed to hold to a draw. Holland and Sweden are perennially popular in my house, and I will be happy to cheer on the Italians and the Spanish. I'm not sold, though, on the latest ads they're hoping to beguile American viewers: “It only takes 90 minutes for your world to change". I'd never thought about it before but football does have brevity on its side, being certainly shorter than your average baseball or American football game. Still, that sales pitch can't but sound a little forlorn to me: it'll be over soon.