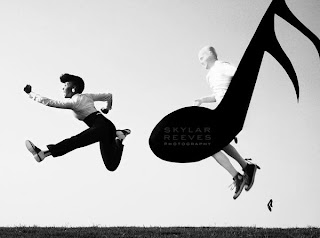 Entering the Roseland Ballroom on 52nd street to see Janelle Monae perform live, I had only one prayer: that if she stage-dived in my direction, I would not be the one to drop her. I've seen her live on Youtube and she always ends her set with a stage dive (one time a man got up and started dancing next to her, and she stage-dived just to get away from him, leaving the poor schmoe dancing alone on stage while she circled the theatre on her back). She's a terrific performer live, with a theatrical, surreal wit, as if James Brown had consulted with Salvador Dali before leaping from his cloak. The best parlor game with Monae, in fact, is guessing her influences: she jitters across the stage like a robotised Little Richard, does the old James Brown I'm-so-electrifying-I've-given-my-own-microphone-a-shock routine, brings off a one-legged walk worthy of Steve Martin, shadow-boxes like Mohammad Ali, and then — yes — stage dives, although the dive was actually the only disappointing thing in the show: one quick loop into the front row and back. Otherwise: stupendous. Miss Monae is small — 5' 7" with an extra six inches supplied by that high-rise rockabilly quiff — but everything she does is big, from that beautiful belter of a voice, to the concept-album megolomania of her songs (her latest album, The Archandroid, is Metropolis-meets-Fundadelic sci-fi allegory: shrinking violet stuff), through to the commanding wit of her stage presence. She is not one of those acts who starts small and then builds. She seems to have been born fully-formed into the world, as if by immaculate conception, while everyone else plays catch up. She's like the biggest pop star from a planet you've never heard of.