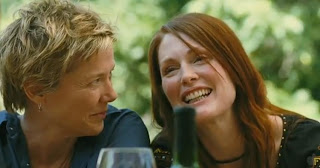 In Lisa Cholodenko's The Kids Are Alright Annette Bening and Julianne Moore play a middle aged lesbian couple — affectionate, bickering, slightly passive-aggressive in that way of new-age couples whose vocabulary outstrips their emotions ("Go easy on the wine honey" Same goes for the micro-managing") — with two teenage kids, played by Mia Wasikowska and Josh Hutcherson, who decide to look up their biological sperm-donor dad. He's played by Mark Ruffalo, in a sequel-performance of sorts to his ne'er-do-well brother in You Can Count On Me: a proud college drop out who has opened his own organic restaurant, he oozes casual, unkempt virility. Ruffalo's great at bringing out the charm of immature boy-men, rough at the edges, with possible a skateboard or two in their closet, who can't quite seem to do the right thing. As in his 2002 film, he becomes instantly attractive to the two kids for his rakish ways: his motorcycle, his pride in his drop-out status, his chill attitude to the uptight decision-makers in the adult world. Chodolenko, who wrote the screenplay with Stuart Blumberg, has done something instinctively smart here: she's taken one of those plots in which a foursquare family, loving but repressed, is loosened up by the incursion of a wild card — but she's swapped the roles. The uptight family is represented by the new-age lesbian couple, hiding their emotions behind hen-pecky emo-talk, and the wild card is an unreformed rake. Is such her film is an affectionate satire, of sorts, on the kind of organic-vegetable-eating, compost-mulching uber-liberal Californian lifestyle she clearly knows inside out: Guess Who's Coing to Dinner, a generation later — which is to say, upside down. It's a oasty-looking and immensely likeable film, full of winning performances. It's been a long time since Bening did comedy — her reaction shot in The American President, when she realises she's insulted the president, is a small masterpiece of scrambling recovery, and maybe my favorite such double-take in the last 30 years of movies. Her Nic, here, is a terrific mama bear who drinks too much and clutches too tightly: comic and hurt and fierce and touching, in quick rotation, in practically every scene. Sometimes, that dexterity shows up visibly, in the manner of recent Bening performances — you can see the actress throttling forward, easing back, her touch almost too exquisite — but not often. Ruffalo's role is a little more schematic than it was in You Can Count on Me; he's more of a liberal pin-up here, and sexier than he's ever allowed himself to be, maybe because he knows his character is due to be taken down a peg or two — you can see instantly he's to much of a kid himself to be a proper father to those kids — but I missed the scene that came next: the one re-establishing his basic, muddled decency. The big surprise for me was Julianne Moore. I've been a bit of a Moore Agnostic over the years for largely physiognomic reason — that odalisque mask of a face seems too inexpressive a tool for an actress of her ambitions — but she delivers beautifully limber, ditzy comic riffs here, particularly during the Plot Development I Shall Not Discuss. She plays a woman so swaddled in the gauze of therapy she can't recognise her most basic drives when they come knocking. For the first time, we see behind the mask and what we see is both touching and funny: blind existential panic. (July 7th) B+