Some thoughts on that 4-1 score 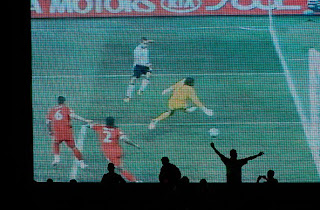 I have to say I'm rather grateful for the margin of Germany's victory. It silences all doubt. What's been fucking England up is not that they lose but they lose by such tiny margins. It's those penalty shoot-outs. They leave you with such a haunting sense of what might have been. Add that to an under-perfoming side and the result is almost permanent heartbreak. But with 4-1, all that goes out the window. It's a clean break. Of course there was that disallowed goal, but even that gets buried beneath 4-1. Even had the goal been allowed, we still would have needed to score again and we didn't even come close. End of story. It's even rather bracing. Andrew Sullivan has a thread going about America embracing football eventually.

"Maybe when Americans realize that World Cup football is not about football, it's about nationalism, they'll like it better."

He's onto something, but he's got it exactly backward. It's the reason America isn't interested in football: they have no need of placebo nationalism when they're too busy practising the real thing. Football is of overwheening importance to nations who've been relegated from world power status (England) or had a shot but blew it (Germany) or are due an upgrade some time soon (Brazil). But if you're actually top dog, as the US is, just, why compete? You have no need for the national catharsis of football.