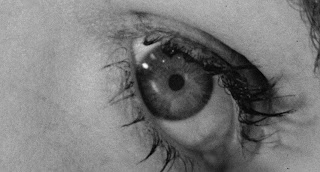 "What draws me in is the sheer artistry of its director. That, and those opening scenes with Janet Leigh, her boss and his millionaire sleazebag who get taken for a ride. All of those great scenes with the cop on the road. I love when she brings her money into the bathroom and peels off enough bills to buy her new used car. The film is still good after that – creepy and thrilling. But it is those first moments that make it what it is: a timeless piece of rich, dense, fulfilling cinema. You really don’t get better." — Sasha Stone, Awards Daily

Nyeaah. You don't get any better than Psycho? How about North by Northwest, Rear Window, Strangers on a Train, Notorious, The Trouble With Harry, or To Catch a Thief? I've always thought Psycho one of Hitchcock's weakest films. As Stone rightly says, it basically has the best opening twenty minutes of any Hitchock movie, but there's a reason for that; everyone always praises the radicalism of Hitchcock killing off his heroine in the first reel without mentioning the consequence: the film literally has to start again, halfway through, with a new hero and heroine. It's literally a do-over. The ungainliness of that has never struck me as particularly winning, especially from so beautiful a formalist as Hitchcock. The big clue is that nobody ever gets over this hump without mentioning the "mastery" of Hitchcock, as if the only way to fully appreciate the drama is to be yanked forcibly yanked out of it. (It's the same problem with virtually every frame of Kubrick, but that's another story). Then there's all those cellars and skulls: I've always liked Hitch best when he lets horror unfold in public, in broad daylight — the murder at the U.N. in North by Northwest, or best of all the murder in The Trouble with Harry, which takes place on a crisp fall day — as if to show us that our worst nightmares are waking dreams, from which there is no escape. He practices a rare species of Gothic blanc. Psycho opts for actual dungeons and darkness, as if all the lace-and-candle Gothic accoutrements from Du Maurier's Rebecca had risen to claim him once more. Psycho turns 50? It seems a lot older.