Britain and the oilspill: fighting the last war 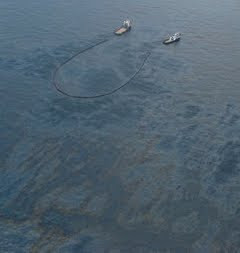 "The British media are mightily offended over what they see as anti-British rhetoric in the administration's attacks on BP. My feeling is that the specifically anti-UK element in the U.S. reaction to the oil spill has so far been impressively slight--and far smaller than would be the anti-US reaction in Britain if the case were reversed. Americans seem no angrier with BP than they would be with one of their own oil companies. I don't think they care one way or the other that the firm is British." — Clive Crook

It's truly bizarre, as a Brit living in the US, to witness the British press whining so. As I've said on this blog, I'm absolutely amazed there wasn't a more nationalist flavor to the debate earlier, and I'm still amazed at how mild it is, if it's even existent at all. There doesn't seem to be any anti-Brit feeling coming out of the Gulf. Imagine the uproar if an American company had fouled the coast of Normandy, or the white cliffs of Dover. I suspect a large part of this is residual anger left over from the Bush administration and the way Blair caved over Iraq. The British press are saying to Cameron: here's your chance. Don't do a Blair. They're fighting the last war, as people always do.