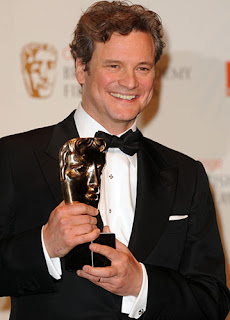 If there's was a theme running through the whole evening — or indeed British filmmaking in the last few years — it was that "gritty" "street" and "contemporary" win the day against all comers. Almost every other clip featured peeing, barfing, or verbal cheekiness of some form or another. The prevailing humor was I'm-crap British self-deprecation. The streetwise A Prophet beat out the historical drama The White Ribbon for foreign film. An Education's story about a May-December romance between a married older man and a teenage girl, lost out to Fish Tank's story about a May-December romance between an older married man and a teenage girl set on a housing estate. And the Hurt Locker beat Avatar — exactly the kind of Big American Movie the Brits like to look down on. Christoph Waltz gave another charming, literary speech. Duncan Jones got beautifully choked up. Vanessa Redgrave performed an elegant and moving curtsy for Prince William. (Who'd have thought I'd ever get teary over a curtsy?). Rupert Everett looked like he'd got stuck in traffic and sent a dermatologist along in his place. Nobody appeared able to read from an autocue. Colin Firth spoke movingly about the guy who came repair his fridge. Mulligan looked mildly sick. And Bigelow was pure class — right now, the streets of London are lining up with British men eager for instruction on how they might impress such a creature.