Loving the uncool: An Officer and a Gentleman 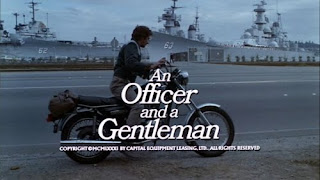 "It is much easier to proclaim dislike for a popular movie than to admit to liking an uncool movie," blogged the Self-Styled Siren the other day, issuing a challenge for people to fess up to their uncoolest tastes. She laid down some ground rules:—

"By uncool, the Siren doesn't mean "slightly offbeat" or "quirky" or "underrated." She means "courting hoots of derision from critical colleagues." Picking a lesser work of a widely admired auteur doesn't cut it, because after all, even late Hawks is still Hawks. And picking a film that was once lambasted, but is no longer, is also not exactly what the Siren had in mind. When the estimable Girish Shambu called for one of the first blogathons, and designed it around Showgirls--now that's what I'm talking about. Larry Aydlette on the great Burt Reynolds, Dennis Cozzalio resurrecting 1941; these kinds of judgments take some nerve. Others like Glenn Kenny speaking up for the reviled Ishtar also count."

Most of the Siren's pics are too old to count (how can you feel shut out of any consensus on Susan Hayward? I would be hard pressed to find amongst my friends anyone with an opinion of Susan Hayward, good or bad), and while I can't quite echo her bravery with regard to Merchant Ivory movies, I did catch Room With A View the other day and was taken aback by its infectious high spirits (also taken aback by the number of bare English arses it contained. Seriously. Have you seen it recently? It's probably got more bare English arses than any movie, ever). But off the top of my head, I came up with the following films, their uncoolness not a camp indulgence, but a weary badge of (sort of) honour.

— Footloose. One number in particular: 'Let's Hear it For The Boy'. What can I say? The theme song every sulky, alienated teenage boy dreams of hearing.

— The Bridges of Madison County. The only film that has ever made me honk like a sealion. Also the only film I can think of recently where they were genuinely in love and genuinely had to leave one another. It's making me sad just to think about it.

— Titanic. My wife still looks at me funny when this one comes up.

— Avatar, too, for that matter. A lifetime of mockery awaits me. It's okay. I am strong.

— Rocky. The scene in the pet shop. Back when Stallone was a contender. (I also liked the flashes of old glory in the most recent Rocky.)

— In Her Shoes. Liked it a lot. Didn't even think it was too long. Another hour and I'd still have been there, hand in my popcorn.

— Kevin Costner in Tin Cup. Kevin Costner generally, in fact. I love him best with women that are smarter than him. Not sure what that says.

— Terms of Endearment. I am a big fan of James L Brooks and even dragged a friend along to see Spanglish. By which standards Endearment does not look too bad at all. In fact, I will go to bat for this film. Any time. Any where. Any hoo.

— Anything with Kurt Russell and Goldie Hawn