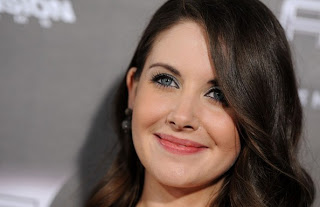 So we knew about Jason's Segal's slobby, slightly self-hating, love-handled charms. And we obviously knew about Emily Blunt's mixture of gameness and dry wit (an unbeatable combination). For me, the real revelation in The Five Year Engagement was Alison Brie, fresh from playing Pete's hoity-toity wife in Mad Men and here acquitting herself of an impeccable sloan-with-a-phone English accent, all the while bringing off some stealthy and not so stealthy scene theft involving silly voices; early on during a wedding speech, delivered basso profundo to stave off tears, and later on, as Elmo to Blunt's cookie monster during an in-depth and very serious discussion of emotional commitment. Now, Blunt's cookie monster is good, if a little half-throated, but Brie's Elmo is a gurgling, unselfconscious delight: I wanted all such conversations on this topic, in every romantic comedy made forthwith, delivered in the same saucer-eyed squawk. C+