They're going to put me in the movies 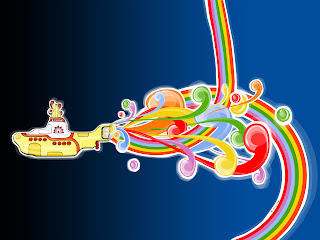 'In 1968, while meditating with the Maharishi in India, John Lennon was seized by a great idea. The Beatles had been looking for a third film with which to follow up the success of A Hard Day’s Night and Help!. How about an adaptation of J R R Tolkien’s The Lord of the Rings? McCartney could play the hero Frodo, Ringo his devoted sidekick Sam, George Harrison would make a great Gandalf and who else for the grasping Gollum but Lennon himself? Hadn’t he already warned against the siren pull of all-powerful rings (“I'll buy you a diamond ring my friend / If it makes you feel all right”) in Can’t Buy Me Love? Accounts differ as to what happened to the project. According to director Peter Jackson, who brought his own version of The Lord of the Rings to the screen in 2001, it was J R R Tolkien who nixed the idea. According to Apple film chief Dennis O’Dell, McCartney and Lennon approached Stanley Kubrick to direct the film, having lunch with the director at EMI studios, where he told them the book was “unfilmable”. The Beatles turned instead to making Magical Mystery Tour, pilfering some left-over cloud footage from Kubrick’s Dr Strangelove for a sequence depicting an acid trip.

It’s hard to imagine Buddy Holly or Elvis taking a meeting with Stanley Kubrick to discuss film projects. Pop acts had broken into the movies before, but The Beatles were the first to establish the idea of a multi-platform ‘brand’ which is still the Holy Grail of today’s entertainment industry. The Beatles were good at the movies for the same reason they were good at being Beatles: they were each gifted collaborators, their four-way synergy an echo of the rough, collaborative magic that powers the film business. If anyone was going to get the movies it was going to be the band with two lead singers, three song-writers and a drummer who was also a star.

Of the five films the band made together, A Hard Day’s Night (1964) is definitely the jewel in the crown — “the Citizen Kane of jukebox movies” in the words of critic Andrew Sarris, and certainly the only rock musical with an Oscar-nominated script. Writer Alun Owen spent a day with the Beatles in Dublin in 1963, when their touring schedule was at its most chaotic, catching perfectly the mix of sarcasm, wordplay and absurdism with which the Beatles twitted their fame: “How did you find America?” “Just turn left at Greenland.” The band would experiment with surrealism throughout their film career, from the Dadaist cut-up of Magical Mystery Tour to the child-like vers libre of Yellow Submarine, but arguably their instincts for the absurd were at their sharpest when recording the day-to-day existence of being a Beatle, Dick Lester’s scuffed black-and-white photography capturing a Beatles-eye view of Beatlesmania which threw the conventions of the rock musical up in the air and made a dash for it — into the future, to MTV, and the faux-documentary aesthetic of reality TV.

Help! (1965) cost twice as much — “like ordering up your holidays” said McCartney of the Bond-like fly-past of exotic locations — but felt out-of kilter with the band’s mood, the title track a howl of anguish from an increasingly out-of-it Lennon: “I was fat and depressed and crying out for help.” Magical Mystery Tour (1967) remains “the only film to have been written, financed, produced and directed by a pop group,” writes Bob Neaverson in The Beatles Movies, and that dearth of collaborators — and, as it turned out, appreciative audiences — tells you all you need to know about the film, a slipshod psychedelic collage which seemed intent on effecting a divorce between the Beatles and their public. Interestingly, it was Yellow Submarine (1968), a project which the group shunned initially as a cash-in for kids, that retapped the Beatles unique blend of innocence and subversion — which restored their ‘brand’. Even though the band were dubbed by actors, the film’s mash-up of Op Art exuberance and fond Edwardiana made the strongest case yet for the Beatles being the missing link in English comedy between The Goons and The Pythons.

Monty Python’s Flying Circus began broadcasting just as the Beatles broke up. Ringo made a brief cameo in a 1972 edition of the show, which Paul McCartney used to stop recording sessions to watch; and it was ex-Python Eric Idle with whom George Harrison teamed to produce Time Bandits, The Life of Brian and The Meaning of Life, the two men’s fond, sparky collaboration captured in the recent Martin Scorsese documentary about Harrison, Living in the Material World.

Not all post-Beatles collaborations were so blessed. Dogs still bark at Ringo Starr’s appearance alongside Harry Nilsson in the 1974 horror spoof Son of Dracula, and they curl up whimpering in the corner when shown VHS copies of 1984’s Give My Regards to Broad Street Paul McCartney’s portrait of the artist as groovy billionaire. The Beatles seem to have been unusually dependent on finding collaborators — Eric Idle, Dick Lester — who reignited something of the old four-way electricity they enjoyed together. There is no sweeter moment in the Beatles oeuvre than the scene in A Hard Day’s Night where the band enjoy a quiet game of Euchre in the baggage car while singing ‘I Should Have Known Better.’ They don’t break into song, in the usual, slightly awkward Let’s-put-the-show-on-here segues of jukebox movies. They just play cards, not even bothering to lip-sync, as if the song were just a daydream. And then, after a few bars, they gently slip into it, the way you slip into a pair of old slippers, or conversation with a friend.'

— my piece about The Beatles on film for Newsweek