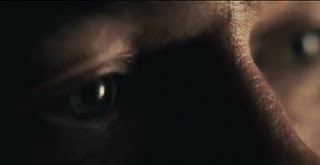 Things we loved about Moneyball:—

1) The fact that ever single baseball movie cliche — it's about heart, spirit, pluck, je nes sais quoi and other time-tested intangibles — is to be found in the mouths of the scouts, not our heroes. The movie sets course against received wisdom and sticks to it.

2) The way the stats uncover the players with true worth — brushing aside the showboats and superstars. The confirmation this gives our sense of the insolence of office and the spurns / That patient merit of the unworthy takes.

3) Brad Pitt's eyes. Shot in extreme close up. The disappointments they have seen. The mixture of bravado and naked terror combined therein — always the combo in any Pitt performance, but normally tripping it up, rather than powering it along. Also, his name: Billy Beane. The perfect follow-up to Benjamin Button.

4) His snacking. Sometimes an irritant but here conveying this particular human's need for calories, energy — juice.

5) The dying fall of his dud pep talk (something like "You're winners, play like winners, and, uh, that's it") as opposed to the one-on-one advice he sprinkles in the next scene. The love of process. Patience. Of a piece with Miller's love of pixillated imagery.

6) The daughter's song — tuneful but not too much so. The look on his face when he listens to the lyrics. On both occasions but particularly the first.

7) Miller's love of horizon lines — Texas in Capote, the field in Moneyball — and the way it comports with his minimalist ethos: the use of silence, the wonderfully spare soundtrack from Mychael Danna, the uncultured frame. Crying out for a curve-ball.
8) The cruelty of baseball — the transfers, the cutting, the look on the player's faces, Pitt's tough love. Hoffman's sullenness.

10) The final speech from the Red Sox manager about revolutionary smarts, making this Sorkin's sequel to The Social Network. Two hours really seem to unlock him.
A