An actor's life for thee and me, Brad 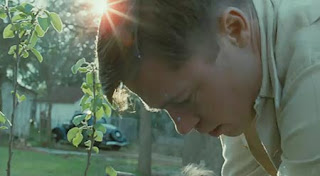 "In this age of diminution and vulgarity at the movies, Malick conducts himself with the austerity of Chaplin and Kubrick – doing it his way, disdaining the press, but getting people to pay for it all. Never forget that a movie director is not just a master of imagery and drama, a conductor of actors, music and design. He is a guy who can persuade someone to put up millions on an airy conversation about life, plants, astronomy and philosophy." — David Thomson, The Gaurdian

Yes it must be a terrific thrill to boss people around like that, and be rude to the press, and stick conversations about life, plants, astronomy into a movie on someone else's dime just because one can, because one is a master filmmaker and all that, although I've never gotten the vicarious thrill from watching those things that some people do — films bent to the will of a master. If Kubrick and Malick ares masters, as no-one seems to tire of saying, what does that make us? Slaves? As I get older, the more easily bored I am of 'mastery', the more it seems a young man's dream — young men, film directors and film critics. The rest of us, as we plod through life, realise just how little we are actually master of, how little we resemble master film directors and more those poor, distracted cattle, the actors. That's my experience anyway. I don't get out of bed in the morning, bark "action" and see my day whip itself into shape. I stumble out of bed, trying to remember my lines, hit my marks as best I can, only to find, six months down the line, that half my performance was not used, or that I'm actually appearing in a comedy not a tragedy as I thought, or that the whole film is crap, through no fault of my own, or maybe it's just my fault, since everyone else knew they were in a comedy apparently, but me. I'm less like the master Malick, in other words, and more like that poor boob Brad Pitt.