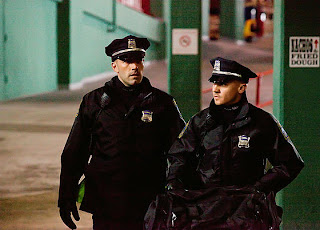 Just a few years ago things look pretty dire for Ben Affleck, left at the curb by his buddy Matt Damon, facing down the twin traumas of the Japanese strafing of Pearl Harbour and imminent marriage to Jennifer Lopez. He seemed a man frozen in the glare of oncoming traffic, a shadowy, sullen presence on screen, staring through low-lidded eyes as if wishing himself gone, his shame so palpable it was almost Nixonian — you almost expected to see a spreading delta of sweat at his arm-pits. Then he came clean about his feelings of superhero fraudulence in Hollywoodland, attracted some awards attention and returned to Boson to make Gone, Baby Gone, an engrossing crime drama about a missing child. It had a sinewy compassion for the working class lives it observed, not least Amy Ryan 's terrific cokehead mom, and was marred only by some whiplash-inducing plot turns in the final furlong and the overcautious casting of Affleck's brother, Casey, as his private eye. He was too slight a presence, a natural supporting player, 2nd fink from the left, and was no match for the bloom on Michelle Monaghan, despite her best efforts to blend into the ratty sofa suites.

One of the pleasures of Affleck's new movie, The Town, is seeing all these bumps ironed out. It's a muscular triumph, from top to bottom, a keening, steely crime drama which sets down in Charlestown, the area of Boston which produces more bank robbers than any other square patch of America. After the heady thrills of Shutter Island and Inception you may find yourself limp with gratitude for a film which feels so rooted in a recognisable quadrant of the map, rather than the frontal lobes of Leonardo Di Caprio. Affleck plays Doug MacRay, the leader of a gang of thieves, who is beginning to drift from the fold and longs to quit the streets altogether. One day, mid-hiest, he falls for the pretty bank manager who they briefly take hostage (Rebecca Hall). I am a big subscriber to the Modigliani-in-jeans charm of Rebecca Hall, but feared for her going into this — would this Shakespearean sylph wilt on the streets of South Boston? — but her fragility actually helps her here. She's one of those actresses who gives her full attention to whoever she's acting with; she drinks Affleck in with an edge of incredulity, as if unable to quite believe she's going to fall for this guy. You get it, though. She's hung up on this bruiser in order to feel protected; that he is, unbeknownst to her, the guy she needs protecting from is not just the plot-twist that provides the trailer with its hook, it's what gives depth to Hall's performance — a study in post-traumatic crushing.

The film's second love story, and in many ways the more intimately rendered, is that between Affleck and his best buddy Jem (Jeremy Renner), a hard-charging Hotspur covered in Fightin' Irish tattoes and crucifixes who has just got out of prison and does not relish the possibility of going back. Almost any other actor might have taken that fact and rooted Jem in fear. Renner goes entirely the other route and ups the glee quotient. Fresh from his bullet-headed tour-de-force as a bomb disposal expert in last years The Hurt Locker — you didn't know which he ought to defuse first: himself or the bombs — Renner rips through The Town with exactly the same mixture of threat and devil-may-care pugnacity. It's crazy, infectious stuff: if you are a man and you watch this movie you will leave the cinema imitating the scene in which Renner, disguised in police uniform, is hailed by an FBI agent behind him, realises the game is up, and turns, opening fire with his machine gune as he goes. The technical term for this is, I believe: unbelievably cool.

A triangle, then, between the sensitive knucklehead who longs to leave the streets of Boston, the girl who will help him and the best friend who takes it as a personal betrayal — The Town is Good Will Hunting with semi-automatics. What gives the film resonance is the amount of smuggled autobiography Affleck has got onto the screen. The increasingly tense dialogues between he and Renner feel like the conclusion to a conversation he has been having with himself since the very beginning of his career, the one about longing and belonging, integrity vs ambition, leaving home without losing sight of yourself, and so on, except instead of working out these issues with Robin Williams in the therapist's office, Doug lets off steam by firing off round after round in some of the most thrilling bank heists since Michael Mann's Heat. A vast improvement, I think you will agree. What most impresses about The Town, in fact, is the way it confound and collapses the central division in contemporary cinema between indie movies and genre pics. It's as if Affleck had spent all his time in the salt-mines of the summer action movie taking notes on what makes the best ones tick, and then infusing that kineticism with the flinty lyricism of the independent films in which he first came to prominence. The result is genre filmmaking of the highest order — with an indelible sense of self-summation, a finetuning and retooling of all things Affleck. As he told the New York Times, “This is an emblem of the person I want to be going forward.” It's more than that. It's a model of personal filmmaking in the age of Transformers. B+