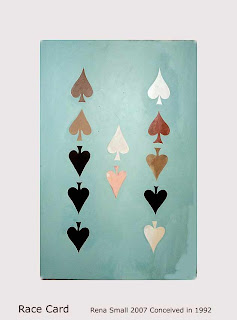 Okay. Let's try and get this straight.

One month ago, John McCain released an advert depicting Barack Obama on a dollar bill, the idea being: look how incongruous an image that is. Last week, Obama made explicit reference to the ad, saying to voters in Missouri that the Republicans would try and rustle up fears that "he doesn't look like those other presidents on the dollar bill." Immediately, the McCain campaign claimed that Obama had "played the race card, and from the bottom of the deck."

Now, here's where things get complicated: in the same week, the McCain campaign released another ad, this one comparing Obama to Britney Spears. But by this time, the "race card" allegations were hitting the airwaves, so commentators started poring over the Britney Spears ad, looking for a racist subtext. Incredibly, some found it. This in turn angered professional race-baiters like Pat Buchanan, who has just appeared on MSNBC saying that Obama can't play the race card simply because someone compares him to Britney Spears.

At times like this, I wonder if I watching an election can make you lose your sanity. Who is in charge of these people? Can someone please adjudicate? Or how about a complete ban on the phrase "race card" until someone works out what it means? Kurt Anderson:

According to the McCain campaign’s new expanded definition of “playing the race card,” it now covers pretty much any mention of racial bias by a black politician. For instance, when Martin Luther King Jr., in his “I Have A Dream” speech 45 years ago this month, said that “we can never be satisfied as long as the Negro is the victim of … unspeakable horrors,” wasn’t he, by McCain’s lights, playing the race card divisively and negatively? It’s a see–hear–speak-no-evil response, an attempt to shut down debate preemptively. It reminds me of the way many Republicans also refuse to talk about inequality—by dismissing any complaint about the increasingly lopsided distribution of wealth in America as an incitement to “class warfare.” Or the way that racism is automatically imputed to opponents of affirmative action, or anti-Semitism to any sympathy for the Palestinians in the territories.