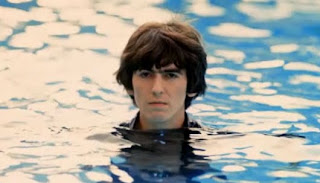 The trailer for Scorsese's George Harrison doc Living in the Material World just gave me the chills. Stand-out quote, from Eric Clapton: "I think we shared a lot tastes, in cars, clothes. And women, obviously." (Delivered with delightful Spinal Tappish obliviousness as to where the sentence might be headed.) The more I think about it, the more Harrison and Scorsese make a perfect fit. It starts with the paranoia, which Harrison developed after the Beatles' first American tour, whose screaming hordes prompted fearful fantasies about staulker-assassins that Harrison dealt with by exploring spiritual beliefs designed to prove that neither he, nor anyone else, was God. He also made a film dedicated to that proposition, The Life of Brian. But his fears proved eerily prophetic when Mark Chapman, claiming the Beatles' music as inspiration, took the life of John Lennon. Scorsese has traversed the exact same celebrity vortex. After Taxi Driver won the Palme d'Or, he too developed a fear of crowds which he funnelled into his staulker-comedy, The King Of Comedy, and then attempted to calm with spiritual beliefs in which the ego of the individual is vanquished. He made two films devoted to that proposition, The Last Temptation of Christ and Kundun. But his fears also proved horribly prophetic when John Hinckley, claiming Taxi Driver as inspiration, tried to murder president Reagan. Ergo: Martin Scorsese + George Harrison = a state of Karmic I-Am-You-And-You-Are-Me oneness.