London bridge is burning down 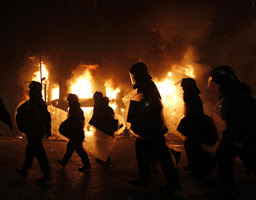 "This is what happens when people don't have anything, when they have their noses constantly rubbed in stuff they can't afford, and they have no reason ever to believe that they will be able to afford it. Hiller takes up this idea: "Consumer society relies on your ability to participate in it. So what we recognise as a consumer now was born out of shorter hours, higher wages and the availability of credit. If you're dealing with a lot of people who don't have the last two, that contract doesn't work. They seem to be targeting the stores selling goods they would normally consume. So perhaps they're rebelling against the system that denies its bounty to them because they can't afford it." — Zoe Williams, The Gaurdian

"Those involved – or their ­apologists – can bleat that it is about unemployment, or police violence, or the cuts in public services. But that is all rubbish. The people who are out on our streets robbing, burning, looting, throwing bottles and putting people of the minimum wage out of a job are self-pitying scumbags." Tony Parsons, Daily Mirror

It's strange this opposition Parsons, Boris Johnson et al, seem to want between sociological explanation and their right to judge the rioters as "scumbags." As if you can have one but not both. Explaining something doesn't eliminate one's right to judge it, morally. I can understand how a serial killer's mind works and still find his acts evil. The only real difference is that moral judgments won't help me catch him — in fact, will probably get in the way. Socio-economic explanations of the rioting in London are, at the very least, handy ways of telling us when our society is likely to go up in flames, where and at whose hands. Useful information to have, I would have thought.