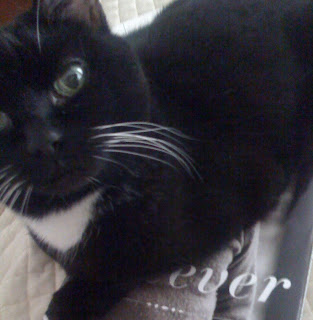 When we were in Woodstock, my cat Hannah (R.I.P.) had an entire garden to roam around in, bringing me neatly bisected mice and leaving them thoughtfully at the end of the bed. She used to get into the garden through the window behind my computer. Then we moved to the city, and my computer no longer backed onto the garden, but a brick wall. It never quite sunk in. Hannah used to jump up on my desk and circle the computer, heartbreakingly expecting a garden where there was now a brick wall, and then skulk off, to repeat the whole exercise a few hours later. I was reminded of Hannah by Sarah Palin's seemingly aimless peregrinations around the primary circuit. But she's not running, exclaim the pundits. What can she be doing? She hasn't said she isn't running, say her fans. And so Palin journeys on, somewhere between 'not quite running' and 'hasn't said she isn't running' in the same way that Hannah was caught in the Neverland between the back of my computer and the imaginary garden she wanted to be there. What Palin is doing, I believe, is looking for a back-door to the presidency through which she can zip, without having to go via the usual electoral process. It doesn't exist, but on she trundles in her van, unable to quit, nor to admit that the back-door is now a brick wall again. The persistance of the delusion can easily be explained, for think how it must have seemed to her, plucked from Alaska to run for the vice-presidency on the whim of a single senator she had never even met and thrust into the heat and light of all that attention. Imagine the visceral impression that makes, and how easy the route to the white house must have seemed. A mere phone call away! And now, heartbreakingly, gone. It makes you wonder how often she was lied to as a kid.