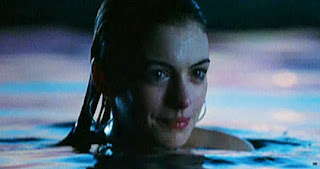 One Day isn't bad, just bitty and listless. About halfway through you realise you haven't even being paying attention to the life-in-a-day conceit, which suggests the film could easily have just pushed free of it altogether. You wait for ages for them to get it together and then, about an hour in, they recollect having slept with one another a few years back. Seriously? Why couldn't they have shown us that year? Anne Hathaway's accent, like some species of cgi effects, seems worse in the trailer, and better once you're immersed in the totality of the thing; but she straddles the frumpy/gorgeous line with slightly mystifying ease (is it those over-drawn features?). The jury is still out on Jim Sturgiss, who could be another Jude Law in the making: he projects too much, doesn't trust the camera come to him, and his character suffers from the scarcity of context: at a certain point everyone, his family included, starts thundering on about his moral turpitude, even though all we've seen him do is take a job on a tacky TV show. But scene by scene, the writing is pungent and vivacious — I loved "all you do is.... fart and watch The Wrath of Khan" — the film is beautifully shot, particularly the skinny-dipping scene, and the guy playing Ian, the loser-comic-boyfriend, is a real find: the audience I was with perked up every time he was onscreen in anticipation of his dippy inflections and his exclamation-point grin. C+