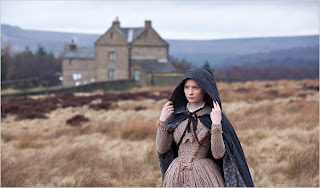 After reading the reviews for the new Jane Eyre, I'm still a little confused about something — the movie's tone. "Visceral," and pulsing with this "raw animal nature" according to Movieline's Stephanie Zacharek. A "subdued" and "austere" production, according to The New Yorker's David Denby. "Feverishly soulful," NPR's Ella Taylor, perhaps splitting the difference. It's strange how this inability to nail down tone afflicts only period movies: people were all over the place about the last Pride and Prejudice, too. Reading the reviews of something like Never Let Me Go, it was fairly easy to establish what the tone of the movie was — that of a flat, grey English morning — with reviewers split as to whether the numbness worked for them or not. But slip back a few centuries and nobody knows whether it's "visceral" "raw" and "feverish" or "subdued" and "austere" . Maybe they are catching a bifurcation that exists in the Victorian era — or more particularly in Jane Eyre itself, enacting a critical pantomime of the book's themes of pleasure and duty, with Denby as Rochester, damping passion's ardor with his high-minded New Yorkerish credentials, while Zacharek and Taylor get a little steamed beneath the blouson.