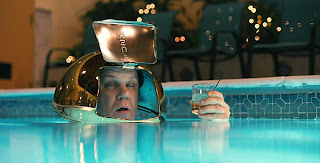 "To be as charmed as I was, you have to enjoy scenes like the one in which insurance agent John C. Reilly plops himself down at the hero’s table in the middle of the ostentatiously holy convention leader’s morning prayer and declares, “I am so hung-over… big-time beer shits… You got a pube on your cheek.” It helps that Reilly is the opposite of a slob-comic. With his hangdog melancholy, he makes even the nonstop cunnilingus allusions poignant—the product of emotional longing. (I hadn’t heard the phrase “Eating tuna from the bottom shelf”—is that native to this movie?)." — David Edelstein, New York

I've been on the fence about Reilly's comic gifts up until now, but all those years languishing in Will Ferrell's shadow seem finally to have paid off, in much the same way that Dudley Moore finally came into his own once sprung from the side of Peter Cook, by then playing Peter Cook in Arthur. Here, after years playing Ferrell's straight man Reilly gets to play the Ferrell role himself and there's something both liberated and liberating about the sight of that vast white belly holding centre court while Reilly lets loose with volleys of filth up above. Edelstein is dead right: it's a performance all about filling another, bigger man's space and out-sized gestures, with the pathos residing in the gap. He ends up in the zone sought by all comic performers: so consistently funny and affecting that all he has to do to is supply little top-ups, little spins on an already-spinning wheel; by the end, your eye seeks him out whenever something happens just to see how he's going to respond. His coarse, mottled flesh — he looks like's he's been pelted with clay by a classroom of kids — is one big, absorbent, ululating sponge. He gets many great moments but my favorite was the sight of him standing in a swimming pool with a trash lid on his head, impersonating R2 D2, simply staring at Ed Helms while he makes out with Ann Heche, too drunk to look away. It's sad and funny and pathetic all at the same time. The whole film is like that. A minor comic gem. B