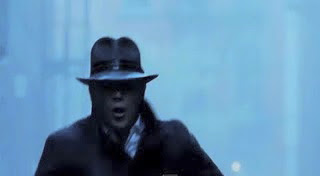 George Nolfi's The Adjustment Bureau slips so neatly and silently between it's two prospective audiences it seems almost to have been designed to touch nobody — like that car in Diamonds Are Forever that does a side-wheelie down an alleyway, brushing not a brick. Bourne fans are going to be yawning halfway through the first expository speech in which John Slattery explains the rules of this particular universe to Matt Damon, in scenes that play like Inception without the effects: pure gobbledygook. Nolfi, who here makes his debut as a director, needs to learn that the audience will buy all manner of outlandishness if they can only clap eyes on it; just hearing about it, as we do here, repeatedly, is like hearing a summary of the more exciting film playing on the screen next door. It's not a question of overloading your movie with effects; Nolfi appears to lack the ability to think visually — to dream onscreen. The images here are as lifeless as a slide-show. He appears to have been most excited by the idea of tying Damon to a chair in a disused parking lot, and then have him listen to a lecture on the ironies of human history by Slattery — and later, the same speech from Terence Stamp, one silver fox making way for another, still sleeker, in infinite regress. Are they all white-haired in eternity, or is it the terminal ennui?
Valentine's dates may find themselves enjoying the chemistry Damon rustles up with Emily Blunt, who plays a dancer he's never supposed to have met — those Boston boys work well off the cool of English actresses, and there are shades of the fraternal crackle Damon once enjoyed with Minnie Driver in Good Will Hunting — but you may also find yourself wondering why, if the filmmakers really wanted to hook us with star-crossed romance, they went to all the bother of all these men in trilbys waffling on about fate and free will and love not foretold in some phosopherescent book. Nora Ephron covered the same ground with just the Empire State Building and a telephone. After the mess of Green Zone and the drippiness of Hereafter, Damon could do with a hit, but he does not look good in a trilby, and he spends too much of the movie gaping incredulously. I'm a fan of Damon, who has something of Harrison Ford's gift for threading action with just the right amount of perplexity, but he needs to stay away from the metaphysical. Slattery floats through proceedings protected by his Sterling-Cooper-Draper-Pryce-patented irony cloaking device, his delivery so dry you half expect him to pop an olive into his mouth, call in Christina Hendricks and start dictation. D+