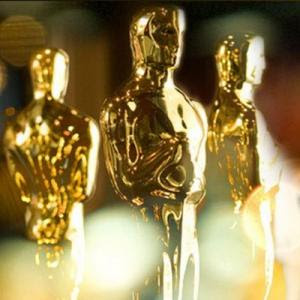 With just one week to go before the Academy Awards, the Oscar pundits — those poor boggle-eyed souls entrusted with the task of cranking out daily copy about a competition whose results can be predicted with 80% accuracy months in advance by anyone with a working grasp of English — are in the finishing straits of their annual ordeal. In a crowded field, the award for most meaningless prediction goes this year to Sasha Stone of Awards Daily who has decided that the results will be "making history one way or another."

If The King’s Speech wins, it will become the first film in 83 years of Oscar history with a British monarch as the central figure to win Best Picture. If The Social Network wins Screenplay, Editing, Directing but then loses Best Picture it will join the ranks of only two movies in Oscar history to do so.

Note the esoteric handicapping ("as the central figure") to add rarity to an otherwise entirely unremarkable fact (the Academy have always been suckers for royalty); also the lining up of those extra hoops (wins for screenplay, editing and directing no less) in order to obscure an increasingly common phenomenon (a split between best director and best film). In both cases, the analysis actually works against a helpful observation: there is rich precedent for both wins. One senses that Stone means "making history" in the same sense that Wolf Blitzer uses to the phrase, to mean merely "marking time." If David Fincher wins the Best Director oscar it will be the first time that someone with the name "David Fincher" has won, too. If Fincher does not win, on the other hand, it will be the 83rd time that someone with the name "David Fincher" has not won, but only the first time that that loss has coincided with a three-quarters crescent moon. Either way, history will be made.
* An occasional column highlighting that species of error which results when a commentator is not just wrong but so exactly wrong that were you to put their point through 180-degrees you would end up with the truth