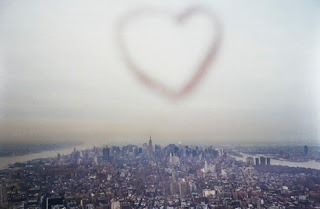 'They are very much a form unto themselves, a species of fiction, really, wherein wannabe Romeos dash off lightly-fictionalized, Gatsbyesque versions of themselves in a tone halfway between come-hither foxiness and plangent entreaty, as if forever posed in some doorway, blowing smoke rings and delivering unrehearsed zingers, before disappearing into the night to work in a soup kitchen or homeless shelter.

I am an outlaw, a troubadour, a world traveler, a born again romantic. I am grounded yet prone to flights of fancy and / or midnight cupcake hunts. I am athletic yet like oysters and know how to eat them. I am easy-going yet firm in my beliefs (high fibre, good scotch, opening your presents Christmas morning rather than Christmas Eve and long, slow, deep, soft, wet kisses that last three days. Yes I liked that speech, too). I like to laugh at myself as often as I can and once cooked blue spaghetti for 12 people. I think that road trips can be a transcendental experience, if unplanned. When I say "let's pack our bags and move to a farmhouse in Tuscany" I want someone who will reach for the closet and start packing. A friend and confidante, a partner in crime, a co-pilot in secret explorations. A thinker, a doer, a lover, a fighter, a laurete. Also, must love porridge and power-tools.

The key, it seemed to me upon first entering this strange alternative universe of spontaneous road-trips and brightly colored pasta, where coy exteriors belied deep reserves of untapped silliness and nobody is ever allowed to plan for anything, ever, seemed to lie in those all-important conjunctions “yet,” and “but.” Thus armed, the author could advance an admirable trait (groundedness), then, spotting the possible negative connotations of that trait (dullness), pivot onto its opposite (fanciful), in an act of triangulation that would bring tears to the eyes of Bill Clinton himself launch into a series of Whitmanesque paradoxes: Easy going yet firm. Grounded yet romantic. Shy but adventurous. Athletic but oyster-loving. Everyone seemed to be “easy going” and “down-to-earth” and liked to “laugh a lot,” mostly at themselves. Favorite Books featured a lot of Haruki Murakami and Stieg Larsson, with maybe some Augusten Burroughs thrown in to suggest the liveliness of the author’s Saturday nights, and then something Tibetan to reassure you they weren’t a complete alkie. Favorite Onscreen Sex Scene tended to be a lot of rough, up-against-the-wall number from 9 ½ Weeks or Damage. Celebrity I Most Resemble ellicited a lot of Maggie Gyllenhaals, closely followed by “moi.” If You Could Be Anywhere Right Now, on the other hand, was an opportunity to kick free of the Gradgrindian exactitude demanded of you by the preceding questions and make good on your profile’s nascent kinship with headiest flourishes of Gabriel Garcia Marquez. Strolling along the cobblestone streets of Prague. Picking berries in Port Townsend. Looking for tortoise in the Galapagos islands. To judge by their personals, a date with your average New Yorker consisted largely of trying to keep up with some pith-helmeted Maggie-Gyllenhaal lookalike, laughing madly to herself as she leapt like a mountain goat from rocky outcrop to cupcake shop, pausing only to have sex in the nearest alleyway before dusting herself down and leaping back into the madcap three-ring circus that was her life, her quest for her own zest-filled quiddity undimmed.'

— from my article about online dating for Slate. Photograph by Trine Søndergaard.