Should Roman Polanski go to jail? 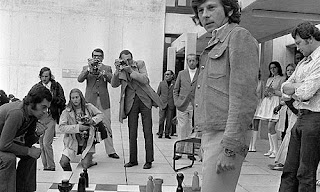 A reader has asked me what I think of the Roman Polanski case. To be honest, I was hoping nobody would ask, if only because I am in two minds, which is never pleasant. Also, I'm not a judge or legal expert and find it a lot easier to say whether I prefer Chinatown to Rosemary's Baby (I do) or which made me laugh harder Bitter Moon or Frantic (Bitter Moon, by a long mile). But the man himself. Yikes. On the one hand, I am extremely repulsed by the people rallying around Polanski at the moment, celebs and filmmakers of various stripes, all waving the 'he's a genius' defence, which strikes me as wholly obnoxious. It's almost worth putting him in prison just to put paid to such nonsense. He's a film director. That's his job. He should no more be allowed to get away with molesting minors than a plumber or a real estate salesman should. What happens if the quality of his films dips? Do we throw him in the slammer then? Or how about a sentence of five years, say, for the dancing scene in Bitter Moon, and then let him out again?

On the other hand, judgement is never pretty. Last night a prosecutor on the Chris Matthews Show seemed to be gunning for him as political sport. There was zero allowance made for the peculiarities of his case, which is not so excuse him because of his fame, but to point out that because of the distorting lense of his celebrity on a judge's decision-making, he has already fled a country he once called his home. The shape of his life has been permanently altered. The idea that he might be uprooted a second time, this time from his wife and two children, and imprisoned in America, for a crime committed 30 years ago, for which he has been forgiven, and which he has never repeated, seems excessive — not wrong, but not wholly just either.

Having read around the blogs a bit, I like David Thomson's comment best: "This is a case that the parents of children should decide." There are more innocents in this story now. If a bank-robber broke down in court and pleaded, "please don't separate me from my family," the judge might be tempted to reply, "Well you should have thought of that before." In this case, that reply is not possible.