Oprah gets bamboozled by an addict (again) 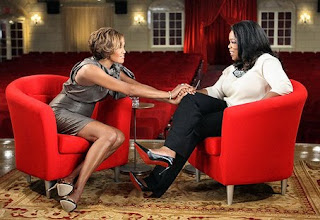 What was the name of that rehab she went to, the one where they let you drink? It sounds terrific. The news that they have to get off all mood-altering substances is often bitterly resented by most addicts. Heroin addicts see no reason why they should come off alcohol. Alcoholics see no reason to steer clear of crack. Crack addicts see nothing wrong with a little weed every now and again. The news — drummed into everybody who enters rehab — that all mind-altering substances are equally dangerous, and all lead to one another, if not already then eventually, comes as a shock. They try to find ways around it. Maybe if I smoked but didn't inhale. Maybe if I drank but didn't inject. They all eventually relapse.

So it's quite something for Whitney Houston to have tracked down the one rehab in America that allows drinking. Presumably she must also have found her own special brand of CA/AA meetings, too, where they don't get too hung up about this whole alcohol thing. How tediously they insist on abstinence! Even more amazing is that Oprah bought it. I know she's not an addict herself, but this is supposed to be her territory. She's supposed to know her stuff when it comes to recovery. "The best interview I've ever done," she said, meaning: I got her talking about drugs. That doesn't necessarily mean she got her talking truthfully about drugs. It reminds me of the time she got bamboozled by James Frey, and for much the same reasons. There is something about addiction Oprah just doesn't get, because, in her head, she is comparing it to domestic abuse all the time.

This is a subject Oprah gets because she has lived it. She was on home turf when talking about Whitney's marriage to Bobby Brown — the way Houston had to muzzle her own career, for instance, so as not to upset the less than luminous Bobby. But when she asked her "Were you weak for him or were you weak for the drugs?" she is offering a get-out-of-gaol-free card which any addict would leap at. "He was my drug," replied Houston, predictably enough.

No, not really. She doesn't. There are similarities and crossovers between domestic abuse and addiction, obviously. Both require recovery, and the recovery for both largely consists of sharing your experience with others who have been through the same thing. But the very same sympathy you offer a victim of domestic abuse is going to be ruthlessly exploited by an active drug addict. You offer the abuse victim a shoulder to cry on and a sofa to sleep on, and you are being a good friend. You do the same to a crackhead and you will wake up to find your TV gone.

And when a recovering drug addict tells you they are still drinking, every day, and not to even think of approaching them about it, the interview heralding their comeback needs to come with a huge asterisk attached.