Full steam ahead on the ego express 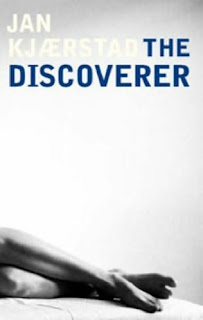 It's not often that literary criticism feels like work. Not real work. Not the kind of work that gets you up at dawn or gives you calloses or makes you join a union. But when a literary editor asks you if you want to review a new Norwegian novel called The Discoverer, which turns out not only to be five hundred pages long and largely set in a Fjord, but also part three of a trilogy, parts one and two of which also run to 500 pages each, many of them set on a glacier, then you begin to feel like you have a real job of work ahead of you. I'm about halfway through the whole lot right now. The guy at the centre of the trilogy makes TV programs about Ibsen, can conduct four streams of thought at any one time and has a magic penis that can automatically fit to the shape of his lover's vagina. I'm not joking. When he's not bringing women to the brink of cyclonic orgasms he's diving into whirlpools and waterfalls to save the lives of random strangers. And when he's not telling us how great he is, the narration changes hands and someone else does it for him. That's modesty for you. For 1,500 pages. Did no-one think to say, hey Jan I think your hero might need a fault or two? This stuff about having a magic penis is great and all, but I think you may lose some people here? I mean seriously. When you think about the effort that other writers go to to smuggle their idealised selves into their books. The amount of disguise they have to don, the amount of self-deprecation they have to pull off, the extra jokes they have to put in so we won't notice, or mind. Not this guy! He doesn't give a monkeys! It's full steam ahead on the ego express. His hero is a stud, a paragon, an intellectual giant, a lion amongst men. He is also, by a long shot the biggest bore I have come across in a work of fiction since that guy in The Runaway Soul.