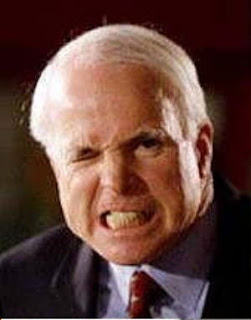 Why on earth does McCain keep announcing his moves, ahead of time? Isn't this exactly what McCain reprimanded Obama for re Pakistan? Before the second debate he told everyone how it wasn't going to be a repeat of the first debate, this time he was going to "take off the gloves," and then footsied around the stage, gamely, for 90 minutes. On Monday, he declared that he would be "making news" with some new web ad about Bill Ayers that they he then forgot to buy airtime for. And now — for he third time — he's definitely going to bring up Ayers. No really. For sure, this time. He's absolutely, positively going to do it. Just you try and stop him.