How you gonna trust, me or your own lying eyes? 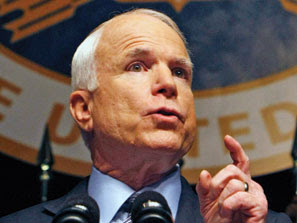 "If McCain raises Rezko personally in the Tuesday debate, Obama must turn to him, face him, and say something like this personally. Everyone knows that Obama hates to do this, but, really, this is a test of strength. 'With all due respect, John, there is only one candidate here tonight who has been found guilty of public misconduct'." — Talking Points Memo

Possibly. McCain's dive into the mud feels too little, too late to me. People have been going over Obama's history with a tooth comb for the last 18 months and all they've come up with is that someone who sold him his house later got convicted of a felony. Andrew Sullivan:—

Voters have gotten to know Obama over the last year. What they've seen is something quite unremarkable: a gifted, cautious, gracious but very conventional politician. He remains very much the same, never panics, and doesn't seem in any way volatile. The last thing he appears to be is radical.

He has going for him the same thing Reagan had: a preternatural and unfakeable ease in his own skin. Carter hammered on about how dangerous a hawk Regaan was, and yet the person voters saw on TV in the debates, breezy and affable, bore no relation to the stick figure we'd just heard about. Psychologists have long observed that when it comes down to a competition between what we hear with our ears and what we see with our eyes, the eyes have it.

More important, though, is this: nobody wants to hear about any of this now. Its like hearing two doctors squabbling as they prepare to take out your kidneys. Points will go to the candidate who launches the least character attacks. Right now, that's Obama. He should keep it that way. The high road looks awfully attractive to a lot of Americans right now: at least it's not a ditch.