Learning to trust the brainiacs 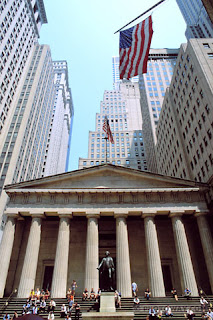 I have been doing a lot of thinking about the Wall street bail-out and have concluded that it will probably be the deciding factor in an Obama victory. Not because he was any more forthright on the subject than John McCain, or because democrats are traditionally viewed as a safer set of hands during an economic crisis, or because voters blame McCain for his deregulatory policies. No, Obama will win because few people I have listened to, read, met, spoken or listened to seems to have a clue what is going on.

Is the bail-out a good idea? Should there be an option reducing investments profits for the affected companies? Will there be an economic meltdown if nobody acts? Is this the end of civilization as we know it? Who in hell knows. All I know is that an issue has landed directly in the lap of the American voter that resists all attempts at easy digestion. The news shows have started to resemble those scenes in Apollo 13 where scientists shour ever-more incomprehensible reams of data at one another, while the anchors sit around scratching their heads. You get this? Nope. What about you? No idea. (Chris Matthews in particular has been getting a lot of gongs in our house for his candid incomprehension).

How does this help Obama? Because what the public is being forced to confront is the unappealing idea — much skirted by the Bush administration — that the average voter does not necessarily understand everything about how a country is run. Instead, we are being redirected by events towards leadership, any leadership, that keeps abreast of complexity, doesn't water it down, and tells us what is the best course of action. The crisis is one big nail in the coffin of phoney populism and a victory for the much derided notion of expertise. An election cycle that began with raucuous derision being heaped on elitism and its variants — a liking for Arugula, a Harvard education, a lousy bowling elbow — is ending with a grateful rush towards the brainiest guy in the room. Right now, that happens to be Obama.