The Lost Finale: tolerance is a virtue 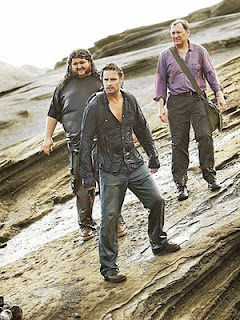 As an exercise in DIY surrealism, I watched the final episode of Lost, not having watched any of the previous episode of this season or any others — maybe three or four episodes of the first but that's it. I lost interest once I realised the writers didn't actually have an idea where it was going, though I marvel at the masochism of the fans who stayed the distance, dutifully helping out the show's creators in its efforts to make it make sense. Kind of DIY-dramaturgy. Masochism, but maybe something else too — a kind of benign acceptance of what comes down the tube, together with an almost maternal love for the programme's all-too-evident flaws. It would have driven me around the bend to try and accomodate the series' confusions but blessed are those who tried. Tolerance is a virtue. And patience. The finale seemed very sweet: lots of weeping and white lights and sweet hereafters, like an episode of the X-files in Jungian therapy. Man, though: those are for some of the most boring-looking actors ever to grace the screen, large or small.