Where is the Situation Room? 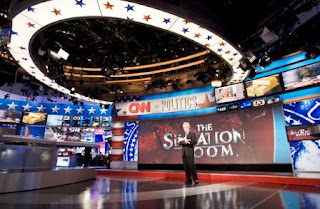 The Situation Room is a show on CNN, hosted by Wolf Blitzer, named after the room in the white house where the president goes to huddle with advisors and make important foreign policy decisions. Beyond that, all is confusion. On some occasions, Blitzer invites viewers to join him in the Situation Room, thereby implying that it is the studio in which he stands, boasting an impressive bank of TV screens. Very Situation Roomish. But on other occasions he will say to viewers "You're in the situation room," implying that the viewer is in the Situation Room, or maybe that the room is more a state of mind than an actual place. So which is it? The room in which Wolf is talking or the room in which I am watching Wolf talk?