Better than a kick in the kidneys 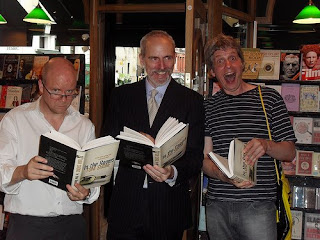 Toby Young, myself and Cosmo Landesman at the launch of my novel, In The Rooms, at Daunt's Bookshop on Fulham Road last week. It was a lovely evening, as they say in Jennifer's Diary. I saw a lot of friends I haven't seen in ages: the poet Craig Raine, Cosmo and Toby, with whom I used to work on The Modern Review, a contingent of the Sunday Times gang, headed up by my old boss Harry Ritchie, and a clutch of other fellow writers, most of whom have committed the cardinal sin of writing bestsellers, at one time or another, some of them repeatedly. I can only imagine how tiresome a string of unblinking megahits must get after a while, how insulated from the real world. Most of them have lost all sense of every day reality, and have only the scantiest grasp of basic right and wrong. Nick Hornby is a vicious, hooded creature these days, snarling over the top of his beer bottle at anyone who dares come near him, and Helen Fielding last smiled some time in 1992, I believe. As for Gavin Pretor-Pinney, who seems able to write popular science bestsellers almost at will — I believe his new book is a history of dust — the less said the better. To see the effects of fame and success in such vivid close up is... well, it's a salutary experience.
The only downside to the whole evening was that somewhere between getting on the plane at JFK and getting off the plane at Heathrow, I appeared to have contracted a rare and debilitating kidney disease that required three days in the ER, a series of blood tests, daily injections and enough pills to fell a small bison. This put my guests, some of whom hadn't seen me in several years, in the uncomfortable position of having to choose between congratulating me on the publication of my book and inquiring as to the state of my kidneys. It is a measure of the sophistication of my guests that most managed to pull off this impossible task with a minimum of fuss and some grace, I thought. There is no question in my mind that were the positions to be reversed, I would make a complete hash of it. Congratulate them on their kidneys, and commiserate over the book, or some such.