Who's worse: Bush or Nixon? 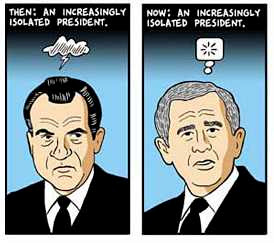 The other night in Washington, after a screening of Frost/Nixon, there was an impassioned debate about whether George W. Bush’s presidency was on a par with or worse than Richard Nixon’s. It prompted an angry outburst from Chris Wallace of Fox News, who scolded the panellists, "I think to compare what Nixon did, and the abuses of power for pure political self-preservation, to George W. Bush trying to protect this country – even if you disagree with rendition or water-boarding – it seems to me is both a gross misreading of history."

You could argue that Wallace has actually hit on the reason Nixon's crimes are the lesser of the two men. Bugging the 1972 Democratic party convention is nowhere near as big a deal as ordering the torture of innocent men (which is what the torture of suspects must logically entail). Yes Bush thought that in so doing he was protecting America but Nixon, too, acted to stop America from falling into the hands of commie-sympathisers during a time of war — a quite noble aim, on the face of it, and no more or less deluded than Bush's notion that torture keeps America safe. How far did Nixon really believe his own internal logic? Being the smarter of the two men, he probably didn't, which means his crimes were the more cynical. Wallace is guessing that Bush bought into his own rationale with greater gusto, which renders his acts the more wretched. He tortured by mistake.