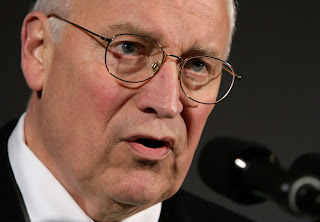 CHENEY: Hmmm. Highest moment in the last eight years? Well, I think the most important, the most compelling, was 9/11 itself — Fox News

Okay, so he adjusted "compelling" for "highest" but still: someone asked him for the highest moment of the last 8 years and 9/11 came to mind. What sort of person, asked to name a high point, a bright spot, a ray of light in the encroaching gloom, even thinks of the single bloodiest civilian slaughter the Unites States has yet endured? Answer: someone for whom that slaughter only confirms the Bosch-like onslaught going on inside his head. Asked, "If the president during war decides to do something to protect the country, is it legal?" Cheney answered, "General proposition, I'd say yes." An astonishing admision. The "war on terror", like the "war on drugs" is, of course, a war without end. Therefore anything the president decides to do is legal, "as a general proposition."